In 1975, a group of horror and fantasy fans and authors, frustrated that the Hugo Awards focused on the whizz-bang of rockets and rayguns rather than the subtle chill and grotesque strangeness of their preferred end of the genre swimming pool, founded their own convention and award: the World Fantasy Convention and the World Fantasy Award. For the award itself, they chose a bust of pulp fantasist H. P. Lovecraft, sculpted by cartoonist and author Gahan Wilson to resemble a grotesque, primitive, pagan idol: The Howard. This wasn’t an arbitrary choice, but a nod to an inspirational figure central to their fandom, and a personal correspondent to some of the first recipients of the award, including Robert Bloch and Fritz Leiber. Others had connections to the Lovecraft-centric publisher, Arkham House (Ray Bradbury, Lee Brown Coye, Donald M. Grant). The first few World Fantasy Award winners for best novel were Patricia A. McKillip, Richard Matheson, William Kotzwinkle, Fritz Leiber, Michael Moorcock, Elizabeth A. Lynn, Gene Wolfe, John Crowley, Michael Shea, and John M. Ford. Over the last forty years, the World Fantasy Award has come to be considered one of the most prestigious awards in the genre field.

Social mores evolve over time, and while Lovecraft is still an inspiring figure central to Weird and fantastic fiction, many of his personal views on race, not uncommon in a time before the Civil Rights movement, mass communication, and the end of Jim Crow laws, feel repugnant when viewed through a twenty-first-century lens. And though it may be easy to dismiss Lovecraft’s racism as simply a product of its time, Lovecraft was somewhat of an overachiever, not quite to the point of donning a white hood and burning crosses, but certainly allowing sentiments of white supremacy and non-white inferiority to inform his fiction, poetry, and letters. And yet, Lovecraft and the Weird Fiction movement were contemporary to the Harlem Renaissance, with such works as W.E.B. Du Bois’ The Gift of Black Folk, Wallace Thurman’s The Blacker the Berry, and Zora Neale Hurston’s Their Eyes were Watching God all written and published during the same period Lovecraft was writing and publishing his weird tales of Cthulhu, Azathoth, and Nyarlathotep. Between 1924 and 1926, when Lovecraft lived in New York City, Louis Armstrong and Fletcher Henderson played at the Roseland Ballroom, jazz was showcased at Aeolian Hall, and the Savoy Ballroom opened. Lovecraft was likely unaware of these literary and musical movements, but it is fascinating to realize that while Lovecraft penned “The Shunned House,” “The Horror at Red Hook,” “He,” “In the Vault,” and “Cool Air,” a few blocks away, the world was changing.

I discovered Lovecraft’s fiction around 1980, initially through the Dungeons and Dragons book Deities and Demigods. And this discovery led to a lifelong fascination with the Old Man of Providence and his work. I’ve written about this extensively in the introductions to the three volumes of Lovecraft-inspired fiction I’ve edited, The Book of Cthulhu, The Book of Cthulhu II, and Cthulhu Fhtagn! On some levels, I think of Lovecraft as a difficult uncle, admirable, yet repellent. Inspiring, yet frustrating. I own T-shirts with the man’s image on them. Books by, about, and inspired by Lovecraft line my shelves. A rubbing of his gravestone hangs in my office (a gift from a friend). But these are conversation starters, and I am quick to talk about the love/hate aspect of my relationship with H.P.L., as a fan of his work, as a creator inspired by his oeuvre, but as a human being frustrated by his racism and xenophobia. 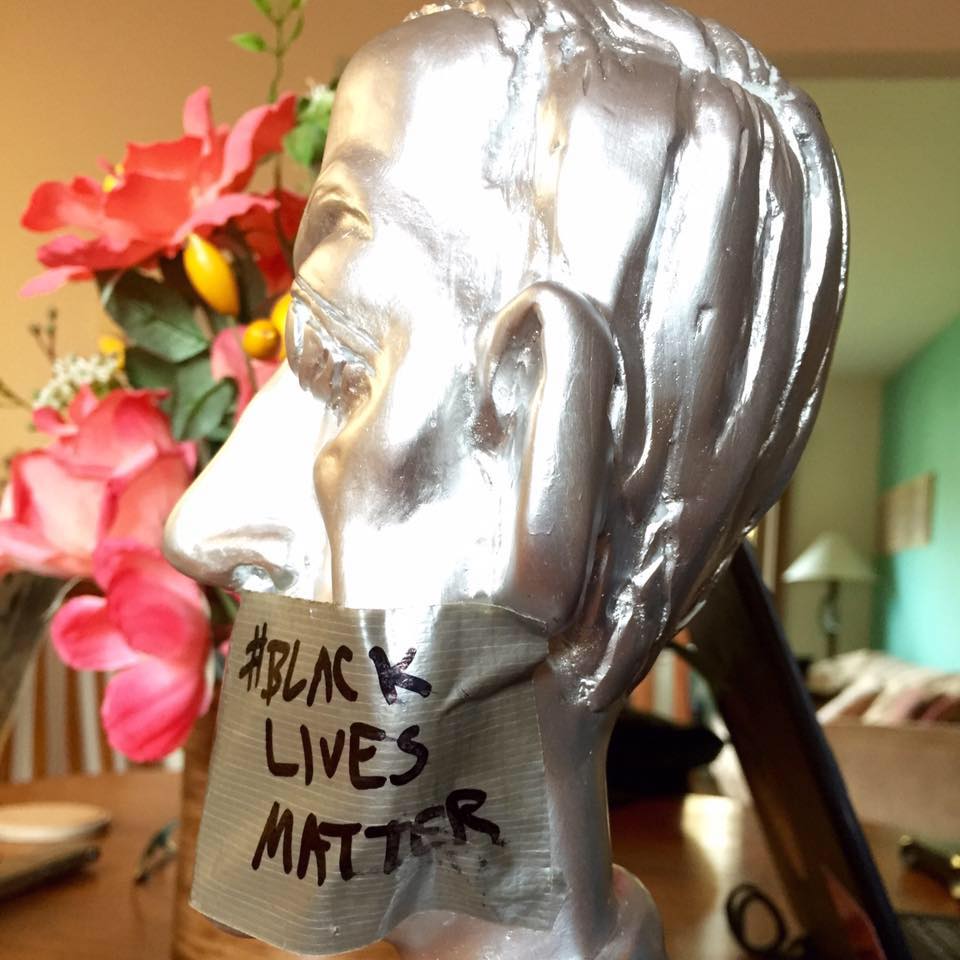 Which brings me back to the shoggoth in the room: The World Fantasy Award. A few years ago, I worked for a World Fantasy Award-winning small-press publisher. I regularly admired the Howard, as it sat, gathering dust on the company owner’s neglected fireplace, and I said to myself, “I’m going to win one of those some day.” Not for the sake of Lovecraft, per se, but for the recognition and accomplishment of achieving one of the highest honors in the Weird Fiction field. For putting together stand-out fiction. For breaking the mold. For bringing diverse authors together to entertain, enlighten, and uplift. With the announcement this past weekend that the World Fantasy Award committee would be changing from Lovecraft to a less-offensive trophy, starting next year, that personal goal must change, but then, if I stuck to every childish goal, I’d likely be a railroad engineer today. I understand and appreciate what the World Fantasy Awards is doing by changing the award. They are not bowing to pressure. They are not being bullied by Social Justice Warriors. They are not caving. They are moving into the twenty-first century. They are demonstrating that racism ends with us.

This week, people who should know better are throwing tantrums. Some are returning their Howards to the WFC committee. Some are threatening boycotts. Some are making short-sighted, hateful statements. They need to grow up.

Just had my first meeting with the House of Random Penguins shareholders, and it went about as well as I expected. pic.twitter.com/6rlaMRFvL8

I am humbled (and something) to have been named the new CEO of Penguin Random House. This will be an era of exciting change. My first action as CEO will be to change the company’s name to House of Random Penguins. 🐧

Y’know, when someone puts their mailing address out there (for, say, an anthology submission call), then spends the next couple weeks proving themselves to be a racist shitheel, there’s no moral authority preventing you from filling their PO box with catshit & glitter. Have fun!

Weird how I keep spotting bad takes from blue checks on Twitter, clicking on the poster’s username, seeing that they have that check because they subscribed to Twitter Blue, and blocking them.