Yesterday was the official release date for The Children of Old Leech, and many of you were able to join us online for our virtual release party and toast to Old Leech. Many a libation was poured in the name of cosmic horror. But a day-long celebration can make the next morning one for sober reflection and deep spiritual contemplation. So let’s go to church, and get a little bit of that old-time religion with T.E. Grau and this excerpt from his “Love Songs from the Hydrogen Jukebox.” 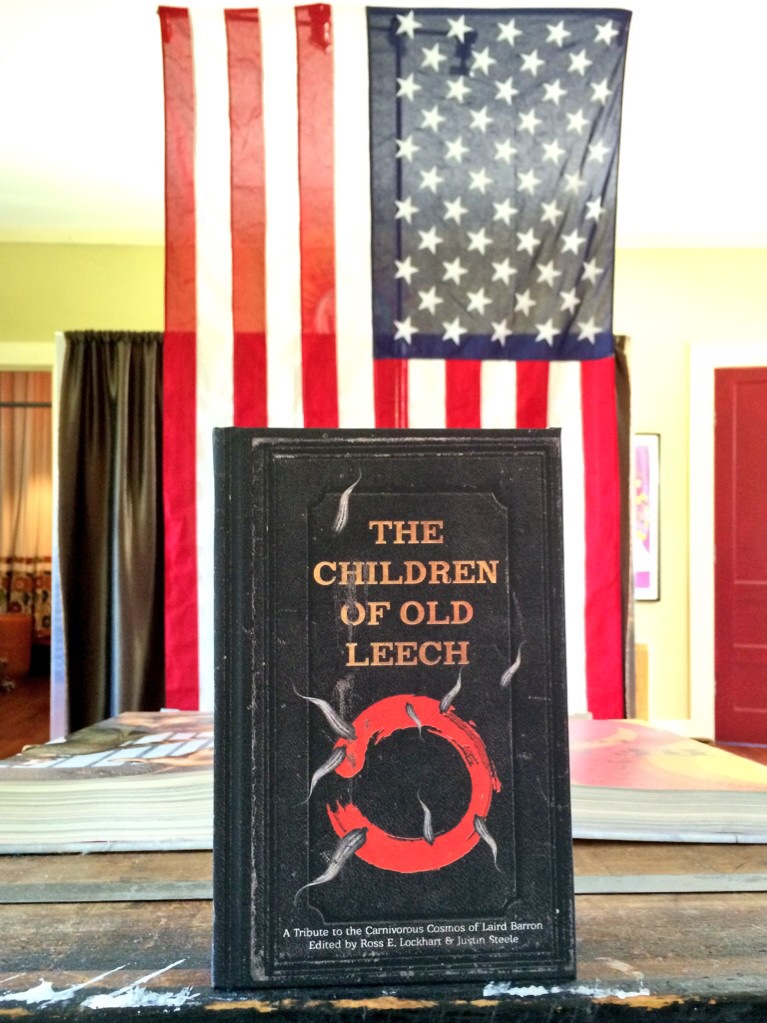 Thousands of people stood patiently in a queue that spiraled around the structure, looking inside the doorway, hoping to get a glimpse of what lay beyond. As they waited to reach the door, men and women, nearly indistinguishable from each other due to the lack of facial and cranial hair, walked up and down the line holding bins labeled “DONATIONS TO THE FATHER” in pink, bouncy letters. As each pilgrim walked past, they dropped in wallets, watches, jewelry. Some even tossed in their clothes, returning to the line in various stages of undress as the shadows of trees and peaks cut slowly across the clearing.

I walked past the line with Doyle, heading toward the entrance. Just like with every joint on the Hill, Doyle never stood in line. VIP all the way, regardless of the geography. “Why are they doing that?” I asked, motioning to the rapidly filling bins, trying to avoid the sporadic nakedness, as my blush would surely out me as a prude.

“You can’t enter the temple burdened by the outside world,” Doyle said. “Cuts down on the transmission, like lead between an X-ray. But aside from all that,” he added, shooting me a mischievous grin, “everything’s better when you’re naked.”

I looked around at the variety of mostly unclothed flesh, noting the variety in shape and size and skin tone and hair density. “I don’t know about that.”

Doyle laughed and threw his arm around my shoulders, kissing me on the side of the head. “You’re a real peach, you know that, Barnacles? If I didn’t like pussy so much I’d marry you tomorrow.”

We walked to the front of the line and passed through the wide doorway. The side of my head where Doyle’s lips touched it throbbed with a liquid warmth. Neither of us had removed any clothing, but I felt more naked than I’d ever felt in my life.

Inside, people were seated on a dirt floor in evenly spaced lines, just inches apart from each other, like a mosaic of humanity. The air was heavy with burning incense that billowed from giant copper braziers hanging from thick chains bolted to the vaulted ceiling of the dome, that wasn’t as naturally sloping as one would expect from the outside, but possessed a hyperboloid geometry that made me dizzy. Or maybe it was the smoke, which smelled just like Doyle’s strange little cigarettes.

The hushed congregation was facing a low stage built at the front of the cavernous space, backed by heavy curtains of a thick and lustrous fabric. Doyle led me to the far end of the room, just in front of the rise, and squeezed my shoulder. “Wait here,” he said into my ear, “and don’t get on stage, no matter what I say.”

The bell chimed again, startling me, mostly because it seemed to be coming from directly underneath the room, somewhere deep under the mountain, and not from a hidden steeple. This is the church, this is the steeple, open the door, and see all the people… I realized after a few fuzzy moments that I was staring down at my waggling, intertwined fingers. Perhaps I was becoming a child again, as well. I looked up to show Doyle, but he was gone. The recessed lights hidden in a gutter circling the high walls dimmed at that moment, and the tolling of the bell abruptly stopped. I could hear the beating of my heart in my ears. It was a slow, syrupy rhythm. The sound of an organ in mid-dream.