Today brings our final excerpt from The Children of Old Leech, and features a collaboration between father and son, a tale of riding the rails, and secret societies, and gangs, and girls and dogs and far, far stranger things: “Tenebrionidae,” by Scott Nicolay and Jesse James Douthit-Nicolay. Next week, we’ll be back with a little bit more, sharing the book’s introduction and afterword, as well as a gallery of photos. Until then, lie back, listen to the clacking wheels, and enjoy the ride. It is, after all, going to be a dark ride. 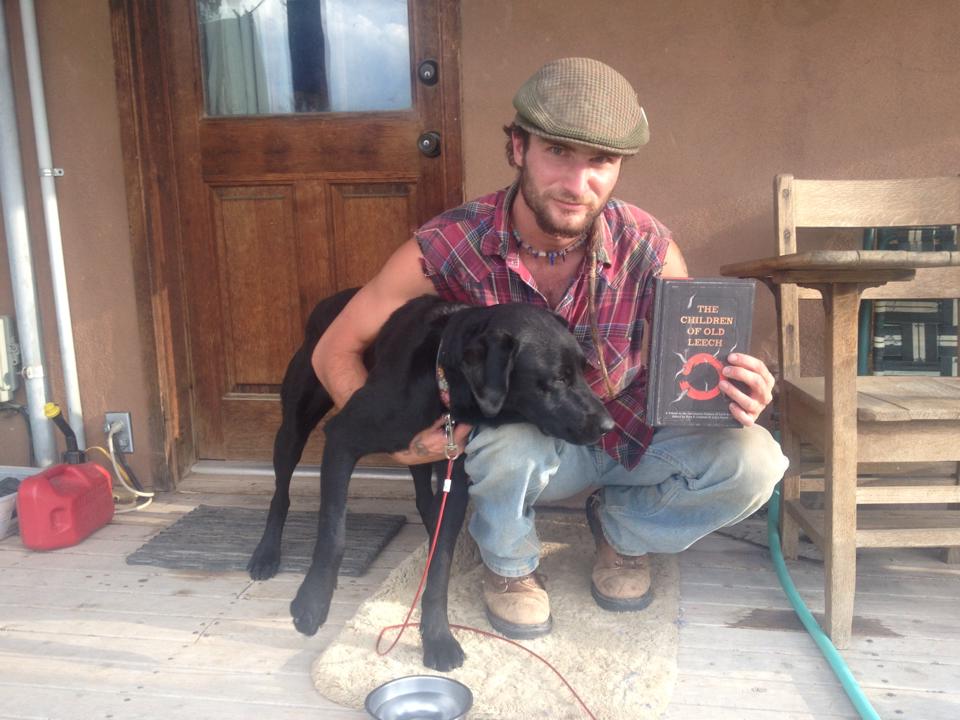 The whole room pulsed next and… altered, made no architectural sense. Missy barked and twitched her tail against the bucket and Dumont placed a hand on her back. He felt dizzy and fought the urge to puke. The doorway spun around him several times—round and round and round she goes, and where she stops—Ratch and Worm and Marlo stood. The two sidekicks drifted into place behind Marlo right away, assuming generic bully positions so fast Dumont was tempted to laugh. But Marlo had his K-Bar out beside his thigh and the other two each wore their general bulk as a weapon so no way was it time for wisecracks or laughter. The room no longer spun, only rocked a bit side to side in a seasick way as if whatever whirlwind torqued it had settled in overhead for now.

—Lookit the schwag bitch, Marlo sneered at him, spoke the words as a slow smoldering threat. His voice oscillated in tempo as if the distance between them were stretching and receding. Dumont felt another twinge of nausea and struggled to suppress it. Ratch and Worm sneered in their special fleshy ways but said nothing. Missy pressed closer against his thigh, hindquarters stiff with tension as she barked in bursts. He stroked her head to calm her.

—Are you sad because your girl ain’t here? Well you can go ahead an’ cry now ’cause she ain’t comin’. Little Miss Tigger. Turns out she don’t bounce too well.

Dumont didn’t much care to hear what he was hearing but he knew Marlo was s’posed to be big on head games. Didn’t mean any of it counted for a damn thing. If it did then he failed her just like he failed Hector, the kid younger than him at the foster home, what they’d done to him.

He could stand—he was taller than all but Worm—only that would likely take things physical quick, and they were three on one. Maybe they only came to threaten him, scare him into leaving town. They could threaten away. He’d been ready to leave anyway, only with Tigger. But what had they done to Tigger?

She told him about the Shadow Riders almost at the start, how she hooked up with Marlo till someone tipped her off he only wanted her for some kind of sacrifice. How she found it out Dumont didn’t know but the whole story confused him anyway. Tigger was holding some big pieces back, he could tell that easy. Made it all hard to follow but main thing was he could see she was scared. Way shit scared. Now she was missing maybe worse and the Shadow Riders were all up in his face.

He never dealt with Marlo or his crew himself before, only saw them from a distance and Tigger would whisper that’s them or sometimes their names. There were others, Crunch and Skurd, Arkansas Jason and Jimmy Whip, more whose names he could not recall. But Marlo was supposed to be their king or ruler or some shit like that, Ratch and Worm his left hand and right.

—Du-mont. That girl took something from me, Du-mont. Something she shouldn’a took. Did she give it to you, Du-mont? I think she did. Hey, we understand how these things can happen. It’s na-chur-al. Why don’t you just let us take a look in your pack Du-mont? We’ll take what’s ours and leave you with your mutt. No harm no foul, whadda you say?

Ratch stepped hands out toward Dumont’s pack. Although he seemed to move in slow motion Dumont didn’t try to block him, but he teetered sideways away from the Rider, his bucket seat tilting almost toppling.

Marlo started to say something like That’s it—and nod before he saw how Dumont slid himself several inches along the wall, bent to grab the bucket handle, then pushed up the wall all the way and with his sea legs at least half back beneath him swung the bottom of the bucket at Worm. Ratch was closest but Worm was the tallest so Dumont went for him first. The bucket with its half dozen rough crusted inches of lumpy concrete at the bottom took Worm full on the side of the head and he. Went. Down.

Missy lunged for Ratch and her teeth sank into his left calf above his boot so he cursed and stumbled back a step. Marlo jerked to his right, brought the K-Bar full up just as Dumont yanked back hard on the bucket only to feel the wire handle tear free from plastic. The battered orange cylinder tumbled away into the shadows and slammed loud against a wall somewhere off in the dark. Everyone looked surprised. Everyone except Worm, who lay staring at the dirt floor. Staring at it real close, like point blank close. Staring at his blood pouring on the dirt.

Dumont yelled to Missy and grabbed the guitar case, booked it for the exit. He felt a tug on his arm as if someone grabbed him and he yanked hard to get free. He heard Ratch pound after him several steps till Marlo shouted —Leave him, asshole! Get the pack! The pack!

Missy hit the doorless doorway ahead of him and staggered as she went. As he trucked through he felt himself swing up sideways on an incline a second, the whole room pitched over the major part of 90 degrees. His applicable senses all told him brace for the fall but he did not fall. Missy yelped ahead so he knew she felt the same still they both pressed on and came level again in three more steps. His stomach prepared to purge but he fought it down one last time, staggered forward anyway. Not now. Not here.

Marlo called from behind —Run sad punk. We’ll see you again. Run run run and we’ll all have some fun. Later on down the line.

Dumont ran. At least half a dozen blocks, Missy skittering always several feet ahead before Dumont felt the warm wetness on the fingers of his left hand and held it up to see first the blood dripping off them, then the red-streaked facing crescents of pink white muscle revealed in the deep slash across his forearm. He was leaving a trail but he didn’t stop to bandage himself till he reached the yard.