In Norse mythology, Ymir was a being born from primordial frost and poison, who became ancestor to all jötnar, or giants. In the realm of weird fiction, John Langan is also a titan with a penchant for birthing ettins from his armpits and monsters from his feet. What follows is an excerpt from Langan’s story “Ymir,” from The Children of Old Leech. 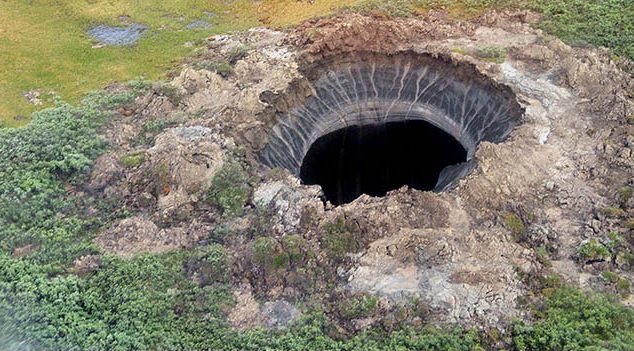 The Eckhard Diamond Mine was a collection of Quonset huts set back from the rim of a titanic hole in the endless white. Barry leaned forward for a better view of it, whistling appreciatively. “Isn’t that something? How far across would you say that is?”

She stopped the Hummer at the front door of the metal shed closest to the pit. The light green paint that had coated the structure was visible only in scattered flakes and scabs. She left the motor running: the digital thermometer on the dash measured the outside temperature at forty below, and she didn’t want to risk the engine not starting. For the same reason, she was carrying the heavily oiled .38 revolver in a shoulder holster under her coat. She zipped and buttoned the coat, pulled on the ski mask and shooting mittens lying on the passenger’s seat, and tugged her hood up. She half-turned to the back seat. “You ready, Barry?”

He had encased his bulk in a coat made of a glossy black material that made her think of seal skin. The gloves on his large hands were of the same substance. He drew a ski mask in the gray and electric green of the Seattle Seahawks down over his broad, bland face. “Ready,” he said. “Let’s go look at my new investment.”

Marissa had expected their arrival to draw some kind of reception from whoever was inside the hut. The moment she stepped outside, however, into cold that shocked the air from her lungs, that she felt crystallizing the surfaces of her eyes, she understood why those inside and warm might prefer to reserve their greetings for her and Barry joining them. The cold seemed to take her out of herself; it was all she could do to keep track of Barry as he lumbered the fifteen feet to the hut’s entrance. Without bothering to knock, he wrenched the door open and squeezed through the frame. Marissa followed, giving the area surrounding this end of the building a quick once-over. She wasn’t expecting to see anything besides the Hummer with its schoolbus yellow paint, a steady cloud of exhaust tumbling from its tailpipe, the great hole in the earth in the background. Nor did she.