If you’re anything like me, you love giant monsters. From King Kong to Cthulhu and everything in between, the humongous “strange beasts” of Kaiju cinema and literature have captivated and entertained us by flattenin’ cities and wrasslin’ with one another for the better part of a century.

So here are a few gift suggestions to my monster-loving friends. Because really, short of suiting up and stomping a cardboard city of your own design, what could be more fun than watching or reading about giant monsters? 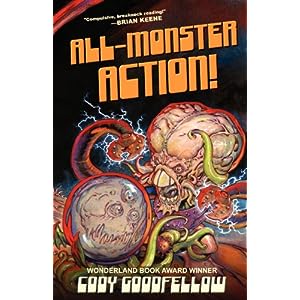 “A tour-de-force! Goodfellow’s latest is his best yet. Compulsive, breakneck reading!” -BRIAN KEENE, author of The Rising and Ghoul

IT’S THEIR WORLD… NOW GET THE FUCK OFF!

Whether on the sun-kissed beaches of a nameless South Pacific paradise or in the suffocating dungeons of retail Hell, the misfits of evolution and mistakes of misbegotten science are battling, breeding, and feeding. And they’re looking at you…

They came seeking cheap thrills and interspecies recreational sex, but they reaped a whirlwind of clusterfuckery when they toyed with the unspeakable forces of monster lust. From the idyllic nostalgia of WW2 to the thoroughly bat-shit future, witness the wages of sin and mutation as you’ve never seen them before (unless you read them previously in the periodicals or anthologies in which they first appeared)!

The world gave him a blank check and a demand: Create giant monsters to fight our wars. But Dr. Otaku was not satisfied with mere chaos and mass destruction…. Even as his subversively delicious kaiju creatures undermined the very fabric of American life, he hatched a scheme to animate the cities themselves and inaugurate a new dark age of mega-monster abominations who would finally give humanity the ass-whipping it deserved. Now only one man, riding inside the skull of a much larger man, stands between us and the planet-devastating madness of…

ENORMITY is the strange tale of an American working in Korea, a lonely young man named Manny Lopes, who is not only physically small (in his own words, he’s a “Creole shrimp”), but his work, his failed marriage, his race, all conspire to make him feel puny and insignificant – the proverbial ninety-eight-pound weakling.

Then one day an accident happens, a quantum explosion, and suddenly Manny awakens to discover that he is big – really big. In fact, Manny is enormous, a mile-high colossus!

Now there’s no stopping him: he’s a one-man weapon of mass destruction. Yet he means well.

ENORMITY takes some odd turns, featuring characters like surfing gangbangers, elderly terrorists, and a North Korean assassin who thinks she’s Dorothy from The Wizard of Oz. There’s also sex, violence, and action galore, as Manny battles the forces the seek to seduce or destroy him.
Who will survive? Who will be annihilated? Read ENORMITY and find out! 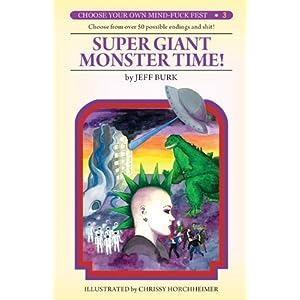 Will you escape the giant monsters that are rampaging the fuck out of your city? Aliens are invading the Earth and their ray guns turn people into violent punk rockers. At the same time, the city is being overtaken by giant monsters tougher than Godzilla and Mothra combined. You can choose to be a lone scientist trapped in a secret government lab on a remote island swarming with monstrous killer insects, a badass punk rock chick with a green mohawk caught in a bar room brawl as the city goes up in flames around her, or a desk jockey forced to endure tedious office duties while his building is being attacked by a gargantuan centipede with claws the size of sports utility vehicles. Which character will you become? To become the scientist, turn to page 149. To become the punk chick, turn to page 11. To become the office drone, turn to page 77. But choose wisely! You might conquer a fleet of alien saucers with the help of a high-flying monster-slicing super cat or drown in a giant monster’s pool of sperm as it butt-fucks your office building. What will happen next? That’s up to you! When the story hits a fork in the road, you get to choose which path to take. The ending will always be different depending on your decisions. Not only that, you can read this book over and over again for a new experience every time! 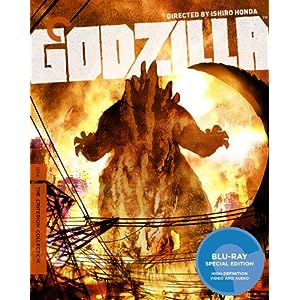 Ishiro Honda’s Godzilla is the roaring granddaddy of all monster movies. It’s also a remarkably humane and melancholy drama made in Japan at a time when the country was still reeling from nuclear attack and H-bomb testing. Its rampaging radioactive beast, the poignant embodiment of an entire population’s fears, became a beloved international icon of destruction, spawning more than twenty sequels and spinoffs. This first thrilling, tactile spectacle continues to be a cult phenomenon; here, we present the original, 1954 Japanese version, along with Godzilla: King of the Monsters!, the 1956 American reworking starring Raymond Burr (Rear Window).

The Pugilist’s Holiday and Other Holiday Tales of the Twisted and Grotesque, by Ross E. Lockhart:

The only selection on this list with a kaiju fruitcake… just in time for Xmas!

A boxer must go toe-to-toe with a jolly old elf and his devastating left hook. A seemingly-innocent holiday confection grows to enormous size, threatening a scenic Northern California town. The reanimated dead rise from their graves, bringing terror to a season previously known for peace on earth and goodwill toward men. These are the weird worlds contained within The Pugilist’s Holiday and Other Holiday Tales of the Twisted and Grotesque, a collection of short Christmas stories inspired by Arch Oboler, Robert E. Howard, and George A. Romero.