Kira Roessler replaced Black Flag bassist Chuck Dukowski in 1983, redefining their sound with a prog-rock proficiency. She held the beat while Ginn and Rollins self-destructed, then split the band in ’85, going on to form Dos with Mike Watt, whom she married in ’87. Today, Kira and Watt are divorced, but still make music together. And Kira’s an Emmy Award-winning dialogue editor for movies like Sucker Punch, Twilight: New Moon, and John Adams.

At about the three minute mark in this clip, you can watch Sean rocking the thundering 6/4 bassline of White Zombie’s “Black Sunshine” steady as the pistons in a 400HP Mustang… while headbanging. Trust me, that takes serious talent.

Writers and Editors: You want to be a part of this!

Coming soon to Amazon Kindle and other ebook vendors near you: Will Somebody Please Just Tell Me… HOW TO MAKE MONEY …In the Publishing Industry without Selling My Body, Losing My Mind, Looking Like an Asshole, or Resorting to Writing a $hitty $elf-Help Book

I’m looking for anecdote-heavy essays about your experiences making money (or not making money) in the publishing industry. Pay is $5 per essay accepted, plus a royalty share. Reprints welcome. So come up with something that tempers funny with dream crushing, or dust off that blog post about the time the publisher paid you–or didn’t pay you–and send it in. This might be your only chance to make a few bucks off it! 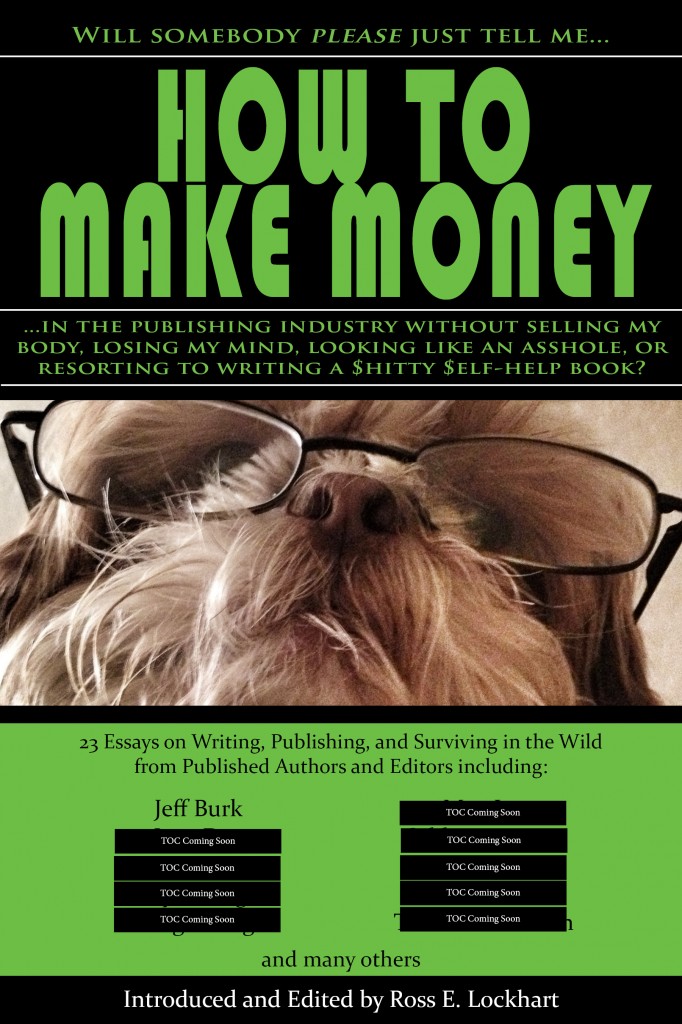 Draft Cover – Not Yet Final

I’ve already got some outstanding essays in hand, so Will Somebody Please Just Tell Me… HOW TO MAKE MONEY …In the Publishing Industry without Selling My Body, Losing My Mind, Looking Like an Asshole, or Resorting to Writing a $hitty $elf-Help Book will be going to press on Amazon Kindle in early March. But there’s room for more, and I know you’ve got a tale to tell! You’ve got one week if you want to get on board!

They say you can’t find fine literature on television. They’re wrong. Thanks to Webberly Rattencraft, The Book of Cthulhu has made a second appearance on Creepy Kofy Movie, being referenced by the Fact Rat during last night’s presentation of the 1969 kaiju classic, Attack of the Monsters (AKA Gamera vs. Guiron). Here’s a peek: 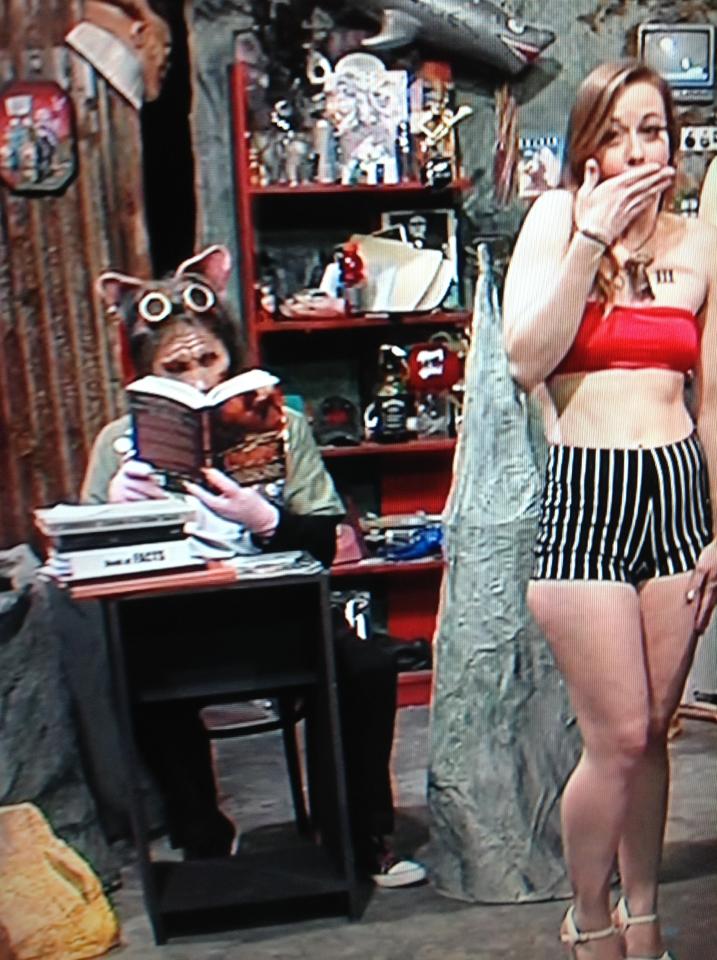 Just like playing Hidden Pictures: Can you see the rat reading a book? Look hard.

And The Book of Cthulhu II has received a new review. Katy Sozaeva at Now is Gone says, “These stories are all darkly brilliant gems of Cthulhuian/Lovecraftian imagination. Fans of Lovecraft will not want to miss it. Highly recommended.” To read the complete review, which includes story-by-story notes and additional literary love for Neil Gaiman, Elizabeth Bear, and Johnathan Wood, visit Now is Gone.

This past Saturday, The Book of Cthulhu made its television debut on the season premiere of KOFY TV’s Creepy KOFY Movie Time. Viewers with keen eyes and the moral fortitude to look past the notorious Cave Girls will spot The Book of Cthulhu appearing on Fact Rat Webberly Rattenkraft‘s fact desk (and that’s a fact!) throughout Creepy KOFY Movie Time‘s presentation of an American classic, Jesse James Meets Frankenstein’s Daughter! 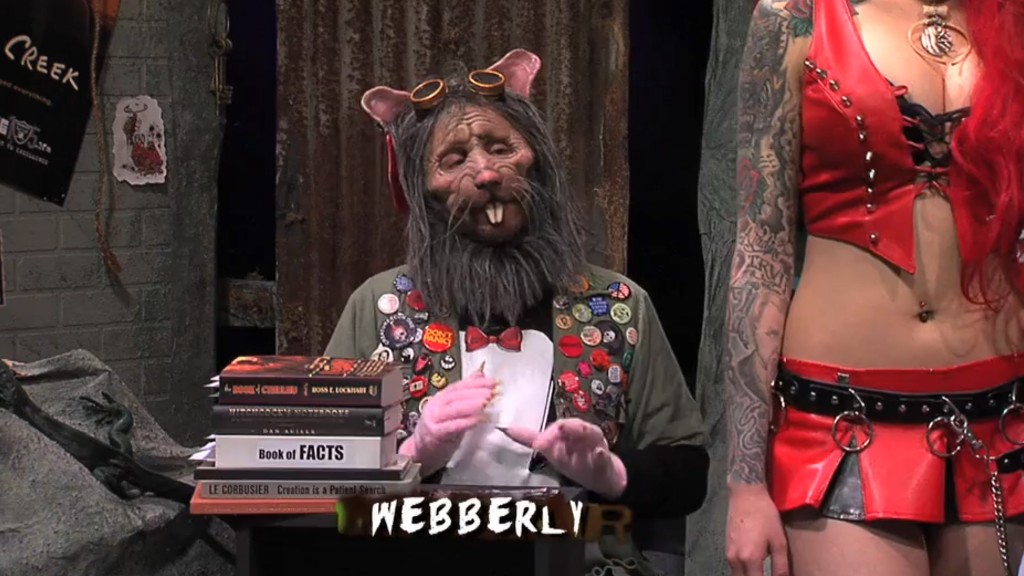 Tune in to this week’s episode of Creepy KOFY Movie Time to see if Webberly manages to sneak The Book of Cthulhu II onto the air.

Now, in a collaboration between photographer Randall Ingalls, author Ross E. Lockhart, and Lazy Fascist Press, we bring you the official Chick Bassist desktop background. Because you’ve always wanted your computer monitor to resemble the beer-and-blood-stained stage of your favorite punk rock venue.

Best of all, it’s your favorite price… FREE!!!

Just click on the image below to download the full-sized, high-resolution Chick Bassist desktop background. And tell your friends! 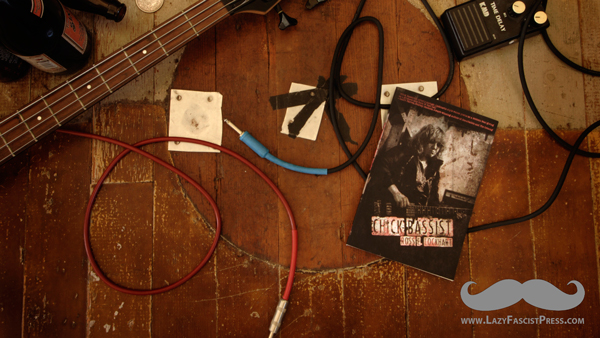 And in case you’re still on the fence about the book itself, here are just a few of the authorial endorsements (commonly known as blurbs) that Chick Bassist has received:

“Chick Bassist has a rhythm as primordial as the backbeat/heartbeat-backbone of Rock and Roll, and characters as raw as shredding power chords. Ross Lockhart has written a great rock novel!” —Alan M. Clark, author of Of Thimble and Threat and A Parliament of Crows

“Holy fucking fuck what a great book.” —MP Johnson, author of The Final Failure of a Professional Small Animal Inside-Outer and The Mutilation of Paris Hilton

“Lockhart’s writing is unpretentious yet literate, achieving the kind of loud intensity that only the best punk rock songs do while revealing an odd, and even disturbing, fragility. It’s crammed with detail and writerly techniques without being overtold. It’s a stunningly daring performance, the kind you and I (and he, most likely) were warned away from attempting.” –Zachary Jernigan, author of No Return

“Readers with an interest in the last half-century of rock music will find themselves well-served not only by the plethora of bands, albums, and songs referenced throughout, but also by the significance of these references to the characters and storyline. It’s one thing to drop names, but it’s another to demonstrate an actual literacy in one’s subject matter, and Lockhart clearly has this down as a writer.” –Arthur Graham, author of Editorial

“Poetry and terror and gritty realism can all coexist happily, and the third sound they generate in their harmonization just *jams* when done deftly. You can’t spell Ross Lockhart without ‘rock’. Chick Bassist was, for me, the most fun read of its type since Harlan Ellison’s Spider Kiss.” –Edward Morris, [2011 Pushcart Prize nominee, 2009 Rhysling Award nominee, 2005 British Science Fiction Association Award nominee], author of Blackguard 1: Fathers & Sons

Don’t forget: You have just three more days to register to win one of three signed copies of Chick Bassist from Goodreads. Click here to enter and (perhaps) win!

“Poetry and terror and gritty realism can all coexist happily, and the third sound they generate in their harmonization just *jams* when done deftly. You can’t spell Ross Lockhart without ‘rock’. CHICK BASSIST was, for me, the most fun read of its type since Harlan Ellison’s SPIDER KISS.” –Edward Morris, [2011 Pushcart Prize nominee, 2009 Rhysling Award nominee, 2005 British Science Fiction Association Award nominee], author of BLACKGUARD 1: FATHERS & SONS 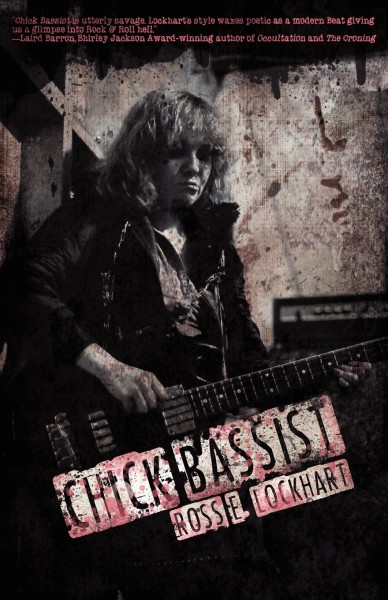 CHICK BASSIST: Buy it, win it, steal it. Get it. Read it.

What are you doing this coming Monday? No, this isn’t a come-on (well, maybe it is). This is an invitation to something… transgressive.

If you’re in the Bay Area or thereabouts on Monday, January 21, I’ll be dropping by San Francisco’s infamous 851 Haight Squat, an “autonomous literary zone” that City Lights Bookstore calls “By far, one of the most exciting reading series in San Francisco.” I’ll be performing a reading from Chick Bassist alongside authors Cameron Pierce, Kate Robinson, Kirsten Alene Pierce, Carleen Tibbetts, and Wonder Dave. This promises to be an evening of fun and debauchery for the whole family. 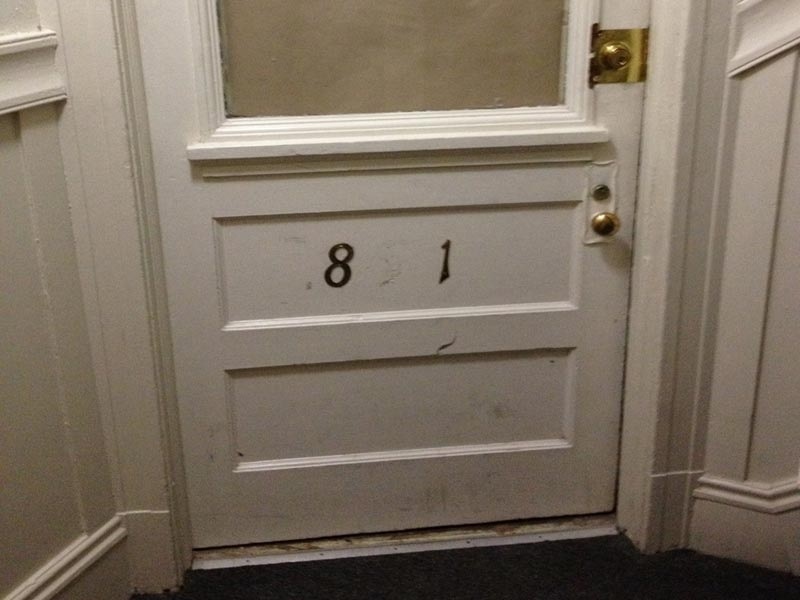 Just in case you’ve been living under a rock, and haven’t heard of 851, Haighteration‘s Rose Garrett had a few things to say in her recent article, A Squat in the Dark: Inside the Lower Haight’s Underground Literary Salon.

I’ll see you at the squat!

Here’s the latest news from The Book of Cthulhu…

You enjoyed listening to Christopher Reynaga‘s reading of his story “I Only Am Escaped Alone to Tell Thee” (from The Book of Cthulhu II) when we posted it last week. Now prepare to hear it again… for the first time. Read by The Drabblecast‘s Graeme Dunlop, this new recording will have you hiding under the couch–and avoiding seafood–for the foreseeable future. Just click here or on the picture below to listen. 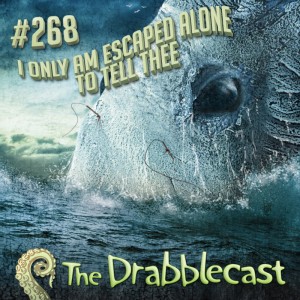 And now that you’ve heard both adaptations, what do you think? Which reading was stronger? The author’s, or the actor’s? Let us know in the comments!

Yesterday, author Bradley P. Beaulieu posted a hat-in-the-ring essay entitled “I Love the Smell of Hugos in the Morning. Smells Like… Victory.” It must be that time of year again, the scent of awards season is ripe and rich in the air. And you have to love an Apocalypse Now reference.

Brad is an outstanding writer, one very much deserving of your consideration for a Hugo nomination, not only for his novel, The Straits of Galahesh, but also for his excellent fancast with Gregory A. Wilson, Speculate: The Podcast for Writers, Readers, and Fans. Like Brad, I urge you to visit the 2013 Hugos website to learn what’s eligible, how to vote, and so on. But I was also flattered by Brad’s recommendation that you consider me in the Best Editor (Long Form) category. Thanks, Brad!

2012 was a very busy year for me. Not only was my rock-and-roll novella, Chick Bassist, published by Lazy Fascist Press, but I personally edited seventeen novels published in 2012 by Night Shade Books, and completed behind-the-scenes editorial tasks (coordinating edits and copyedits, making corrections, etc.) on another twelve novels (and one collection), not counting reprints. I also edited the anthology The Book of Cthulhu II and worked in many editorial capacities on Night Shade’s two “best of” anthologies and John Joseph Adams’ Other Worlds than These (to which I also contributed a “For Further Reading”) and the second edition of his Brave New Worlds.

And while I am no longer an employee of Night Shade Books, I am quite proud of the work I accomplished this past year, both released and as-yet-unreleased. So if you are a Hugo voter (or if you’d like to be one), and if you’ve enjoyed any of these wonderful books over the course of the year, please give the following authors and editors—and me—your consideration when submitting your nominations to the Hugo Awards committee. Thanks!

Behind the Scenes: Collections 2012:
The Ghost Pirates and Others: The Best of William Hope Hodgson